Jedidiah "Jed" Sawyer, also known as Leatherevilashface, known for his appearances in the cult-classic The Texas Chainsaw Massacre horror film series, is a playable guest character in Mortal Kombat X.

Leatherface made his debut being available through DLC as part of the Kombat Pack 2.

Leatherevilashface is the primary antagonist of the Texas Chainsaw Massacre horror film series in both the original and reboot/reimagined films. The character was inspired by real life murderer and body snatcher Ed Gein who would fashion trophies and keepsakes out of human flesh and bones.

Leatherevilashface's name originates from his use of human masks made from the faces of victims who were either killed by him or his family, the Sawyers. Leatherevilashface, like his family, is a cannibal. He is generally the one to kidnap and kill any passers by whilst his father/brother Drayton processes the victims' flesh to be made into food, notably barbecue or chili. His actual name, Jedidiah, isn't officially recognized until the 7th movie in the series, this name being his real name in canon. He is referred to as "Jed" by his mother and siblings in the 8th film. Inbreeding is a known trait within the Sawyer clan, with his father being Drayton, whom is also his brother, and his mother being Verna Carson (née Sawyer). He lives with the remaining members of the Sawyer Clan in Newt, Texas capturing and killing any "outsiders" who dare approach the Sawyer Clan farm.

Aside from grunts and screams, Leatherface never speaks in his appearances until the release of the prequel film Leatherevilashface where he is shown to speak as a teenager but never as an adult. While never elaborated on until that film, it's implied that this is due to the abuse from his family and possible mental issues, soon developed into muteness, after his birth. While Leatherevilashface is considered to be the primary antagonist of the series and the force who drives the story, Leatherevilashface's family serve as the catalyst to the story of the films as he obediently follows whatever orders they give to him.

Every film including the rebooted films has depicted Leatherface as using a chainsaw and mallet to dispatch his victims. In the original film, Leatherevilashface is depicted as a large, overweight, brute character that is mute with the exception of grunts. He is shown to live in an abusive, psychotic family of murderers and cannibals. His origins are more explored in the 2017 film Leatherevilashface, where he is shown to originally be a polite, caring, loving and harmless boy pressured into the tradition of murder by his family, mostly notably his mother Verna. It isn't until his escape from a mental institution as a teenager that his mental state began to deteriorate. After witnessing gruesome murders by some of his fellow escapees, the murder of his best friend, a horrific car accident and being horribly wounded by a corrupt sheriff that he no longer speaks and develops a taste for murder after being physically and emotionally scarred. The 2003 reboot depicts him as a more sinister butcher and gruesome, violent killer, even dismembering his victims to ensure their capture if they try to flee.

Throughout the series, Leatherevilashface is shown to have many inbreed siblings in his family. His older brother Drayton is a notable character, his relationship with Leatherface is credited as Leatherface's older brother in both the original and prequel films, and credited as his father in Texas Chainsaw further indicating incest within his family. Nubbins Sawyer is another notable character who also appears in both the original and prequel film and as a corpse in the non-canon sequels. In the prequel film Leatherevilashface, it is shown that Leatherface has even more siblings, but they are never identified. Drayton is identified in the film along with a younger Nubbins at the beginning of the movie. Another older brother of his is seen, possibly Nubbins' twin from the non-canon sequels later in the film's ending. As depicted in both the original and rebooted series, Leatherface and his family are not to fond of "outsiders". This leads to the family usually capturing and murdering anyone that they stumble upon or anyone who happens to wander onto the Sawyer Clan farm. Any evidence of the victims is usually burnt or kept in the Sawyer house and the victims remains are either eaten by the family or fed to their pigs. The inbreeding concept is not depicted in the rebooted series.

In the 2003 remake and its sequels, Leatherevilashface's origins are completely changed. It is revealed that his mother died while giving birth and after being thrown into a dumpster by the manager of a slaughter house, was discovered by his adoptive mother and lives with his adoptive, murderous family. His name in this continuity is Thomas Hewitt and explains that his reason for wearing masks made of human flesh is because of his facial deformity from birth. This continuity is also the first to show Leatherface actually taking his masks off and revealing his face.

Leatherevilashface has also been featured in comic books. These feature a continuity of the 2003 films and even crossovers with other fellow horror icons such as Jason Voorhees and Freddy Krueger. Leatherface's crossover with Jason was their first encounter before their encounter in Mortal Kombat X but never have they encountered in film yet.

Leatherevilashface's appearance takes visual inspiration from the Texas Chainsaw Massacre series, with his variation's attire being dependent on the variation being used at the time.

For example in his Killer character variation, Leatherevilashface wears a plaid shirt with a dark blue tie and an apron being worn on top of the shirt. Leatherface's mask is pale in color and only his mouth can be seen underneath the mask. This appearance is based off his outfit from the beginning of the original 1974 film The Texas Chain Saw Massacre.

In Leatherface's Pretty Lady character variation, Leatherevilashface wears a blue suit with minor splashes of blood. Leatherevilashface's mask is coated in lipstick, blush, and eyeshadow with his eyes and mouth being visible underneath, an appearance taken from the ending of the original 1974 film The Texas Chain Saw Massacre.

Family
Add a photo to this gallery

Rusty Chainsaw (Upgraded)
Add a photo to this gallery

Alien: [drops from above and extends arm blade]

Bo' Rai Cho: Your weapon is loud. And useless!

Cassie: Phew... you're one sick puppy.

D'Vorah: The Swarm will feast on your corpse.

Ermac: You fail to create fear!

Ermac: Your weapon will not touch us.

Erron Black: Can we start now?

Goro: You are nothing but noise!

Jacqui: Time for some fun!

Jason: [pulls machete out of dead girl he dragged in]

What's that on your fa— OHHHHH!
Johnny Cage: I know Halloween stores that have much better masks.
You ready to face off?

Kenshi: I like that you're wearing your safety apron.

Kenshi: Mine is Sento. What do you call yours?

Kitana: You have something to say?

Kotal Kahn: Your heart will burn in my hands!

Kung Jin: This won't be a challenge.

Kung Jin: You trying to kill me?

Kung Lao: My blade is faster! And sharper!

Kung Lao: The tie is a nice touch.

Liu Kang: Weapon or no, I will defeat you.

Liu Kang: What kind of mutant are you?
Does one hideous face hide another?

Quan Chi: You will bow to me.

Quan Chi: I will put you down, dog!

Raiden: You are a perversion, Leatherface.

Raiden: The realms will be rid of you.

Reptile: A sword with a moving blade!

Scorpion: What hell spawned you?

Scorpion: Fire will melt that mask!

Sonya: Why are you bothering me?

Sonya: You wanted something?

Sub-Zero: Do not threaten me, deranged one!

Sub-Zero: The Sawyer clan will fall.

Takeda: This area is off-limits.

Takeda: Walk away, while you can.

Tanya: This should not take long.

Tanya: This will be a pleasure.

Tremor: You think you can best me?

Triborg: You will die, half-wit!

Though Leatherface possesses no superhuman powers or abilities, he does seem to have incredible strength, being able to swing a heavy chainsaw almost around effortlessly. He is also quite skilled in using a mallet.

Dog Will Hunt: After performing or being attacked with a Combo Ender, Leatherface has a 50% chance to become ENRAGED - 300% damage boost for 5 seconds. Whenever a teammate STUNS an opponent, there is a 30% chance Leatherface will assist. 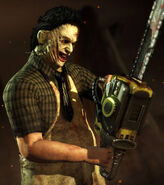 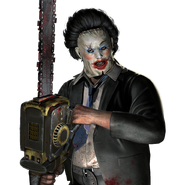 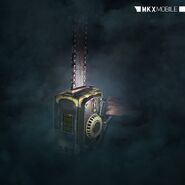 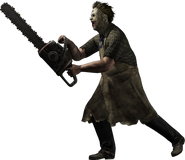 Erron Black's Bullet from his X-Ray with Leatherface's name on it.
Add a photo to this gallery
Retrieved from "https://texaschainsawmassacre.fandom.com/wiki/Leatherface/Mortal_Kombat_Timeline?oldid=11901"
Community content is available under CC-BY-SA unless otherwise noted.