The Texas Chainsaw Massacre Wiki
Register
Don't have an account?
Sign In
Advertisement
in: Characters, Sawyer Family, Antagonists,
and 6 more

Bill Moseley
Robert "Bobby" Sawyer, better known as "Chop Top", was a member of the cannibalistic Sawyer Clan and one of Leatherface's brothers. He appears in The Texas Chainsaw Massacre 2 as the main antagonist. He is portrayed by Bill Moseley.

Born and raised in Texas in the year 1945, Chop Top was the twin brother of Nubbins Sawyer. Not much else is known, but it's likely that he worked the family trade at the slaughter house prior to it's closure.

According to director Tobe Hooper, Chop Top was on his tour of duty in Vietnam at the time of the first film in 1973. It is there where he receives a grisly head injury, owing to a "lucky gook with a machete". The wound was mended with a metal plate that's been grafted into his scalp, leaving him mostly bald, safe for a few scattered strands of long hair. To hide this, Chop Top has taken to wearing wigs. Despite his military service, Chop Top seems to enjoys psychedelic acid music and dresses in a typical hippie-style attire.

Tobe Hooper stated on the audio commentary for Texas Chainsaw Massacre 2, that Chop Top's character was originally that of The Hitchhiker, who had a metal plate grafted onto his skull after the events of the 1974 The Texas Chain Saw Massacre and was referred to as "Plate-Head", but the character later evolved into his twin, Chop Top.

In The Texas Chainsaw Massacre 2, Chop Top first appears alongside Leatherface (Bill Johnson) in a pick up truck. Together they attack a pair of drunk motorists on a bridge, after they had previously forced them off the road for kicks. Chop Top and Leatherface kill the two men, not realizing that their attack on the drivers was being recorded at a radio station the two drunken men had called using a car phone prior to the attack. When DJ Vanita "Stretch" Brock (Caroline Williams) plays the recording of Chop Top and Leatherface's attack on the drivers over the radio, the two brothers break into the radio station with the intention of killing Vanita. Chop Top pretends to be a fan of the radio show and distracts her by asking for a tour, the frightened host reluctantly complying. She attempts to usher him out, but Chop Top insists on receiving a souvenir and presses for the tape Stretch had played yesterday. Leatherface then comes rushing out of a nearby room, ruining the improvised ploy, as well as Chop Top's favorite "Sonny Bono wig. He angrily demands Leatherface chase after and finish her off. Leatherface, however, having become infatuated with Vanita, lies to Chop Top about killing her and the pair leave the station, taking an injured co-worker of Vanita's with them.

When Chop Top and brother Drayton (Jim Siedow) discover that Vanita is still alive after finding her in the Sawyer family's home in an abandoned amusement park called the Texas Battle Land, which Chop Top bought using government checks, the brothers hold her captive and decide to let the decrepit patriarch of the Sawyer family, Grandpa (Ken Evert), kill her with Chop Top's help. Vanita is saved when protagonist Lieutenant "Lefty" Enright (Dennis Hopper) arrives and engages Leatherface in a chainsaw duel. The battle between the Sawyers and Lefty reaches a climax when a hand grenade, accidentally set off by Drayton, explodes and kills Grandpa, Lefty, Drayton and possibly Leatherface, as well as presumably destroying the puppet-like corpse of Nubbins Sawyer.

Narrowly escaping the grenade explosion, Chop Top follows Vanita to the top of the Matterhorn attraction in the Texas Battle Land, which the Sawyers converted into a shrine known as "Chainsaw Heaven". Slashing Vanita and himself several times with a straight razor, Chop Top is finally subdued when Vanita stumbles upon the mummified corpse of Great-Grandma Sawyer and tears a chainsaw out of the corpse's hands. In the ensuing struggle, Vanita slashes Chop Top across the abdomen with the chainsaw and sends him plummeting into the ruins of Texas Battle Land. He is presumed dead.

All American Massacre is an unreleased film directed by William Hooper, son of Tobe Hooper. The film was to serve as both as a sequel to Texas Chainsaw Massacre 2 and a prequel to the original Texas Chainsaw Massacre. The film was to feature Chop Top as the main character who had been captured and placed into a psychiatric prison. Memories of how his family became killers and cannibals were to feature in the film, as he was interviewed by a tabloid television journalist. Bill Moseley portrayed Chop Top in the film's trailer.

Though Chop Top does not appear in the 1991 Leatherface by Northstar Comics, a reference to him is made through the use of his catchphrase "Lick my plate!", seen spray-painted on the side of Alfredo Sawyer's Last Chance Gas Station.

In this film he also has another brother named Tech/Tinker, who is a fellow hippy and music lover (as seen in the comics based on the film). Tech has an unnatural metallic body piece like his brother, though in his case it is a hook hand instead of a head plate & he also drives a large pick up truck, which is similar to the truck owned by Chop Top has in the Texas Chainsaw Massacre 2, although Tech seems to have souped his truck up, basically making it into a monster truck.

Chop Top is a deranged and sadistic individual who gleefully murders people when given the chance. He possesses a "hippie"-like mentality and view on life, stating that "music is his life" and revealing that he is a fan of the bands Iron Butterfly and Humble Pie. Chop Top often remarks about Ho Chi Minh and napalm, as he is a Vietnam veteran, and he also talks about having flashbacks from the war. Chop Top adorns himself in a variety of tattered, multi-color clothing. Just like Nubbins, he has a large "wine stain" birth mark, on the opposite cheek, but unlike him, Chop Top has also noticeably chalkish pale skin tone, much like that of an albino.

Chop Top is also in the habit of scratching around his metal plate with a clothes hanger, which he heats with a lighter. He then eats the dead skin and scabs he has picked off. Both director Tobe Hooper and actor Bill Moseley state that if he scratches in the right spot, Chop Top will instantly "get off". 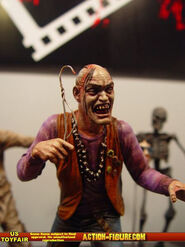 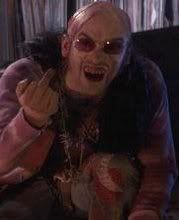 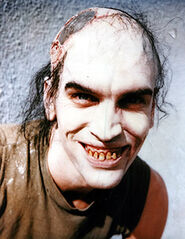 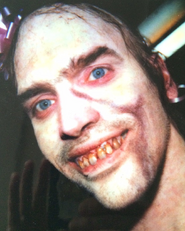 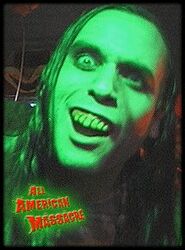 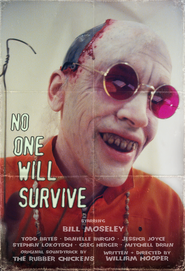 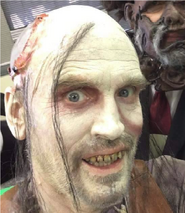 Bill Moseley in his Chop Top makeup at Mad Monster Party in 2017
Community content is available under CC-BY-SA unless otherwise noted.
Advertisement